We have been quite settled in Macloud Ganj for a month now and we have really enjoyed our time here. I thought I might reflect on why that is and what are the things about this place that make it so attractive to most who visit here.

Where to begin? I guess that the big draw card here is the enormous presence of His Holiness the Dalai Lama who has become a beacon of light to many in the world. His simple teaching of kindness to all others, no matter what their beliefs, race or position in the world, seems to hit a universal chord in this materialistic age. The four days of teaching that he gave following the request of a group of Indians, attracted thousands of people every day who crowded into the temple and it’s surrounds and who were universally cheerful and friendly. Around the path we go.

But what else has there been? This question brings up snatches of memory that bubble in my mind. The walk around the circumambulation path each morning; the prayer flags; the prayer wheels rattling; the soaring eagles overhead (actually Black Kites – I count eight circling in the updraft); the croak of the ravens; the troop of monkeys; cows with their calves; the huge bull with gammy legs; splats of wet cow shit to avoid; the thervadan monks in their bright orange robes with their alms bowls; the beggars – missing legs or arms or hands or sight, the indian women in dirty saris with babe in arms – all sitting is the dust beside the path; swinging rosaries in the hands of young and lithe and old, stick supported, all walking around and around. The glass of hot sweet chai in the tea shop at the end. Om Mani Padme Hung says the song of Chenrezig. Then into the temple and it’s ever varying space, sometimes full to the brim and at other times quiet and serene; the main temple with it’s huge Sakyamuni statue looming high over the Dalai Lamas teaching seat; the smaller Kalachakra temple alongside with the compassionate 1000 armed Chenrezig, the fierce Kalachakra and generous Tara statues and where the beautifully delicate sand mandala for Vesak was created and then swept away – impermance; the discordant cymbals and trumpets sounding during the services; the Indian tourists taking endless photographs – in fact everybody taking endless photographs; monks producing iPads from beneath their robes – to take photographs of the temple and their fellow monks; prostration boards, shiny and in constant use by young and old. Om Ah Hung Benzra Guru Pema Siddhi Hung says the song of Guru Rinpoche. The big prayer wheel on the way out spins fast as you walk around it – the bell loud in the enclosed space – clang, clang, clang – slight dizziness as you leave if you stay in there too long. 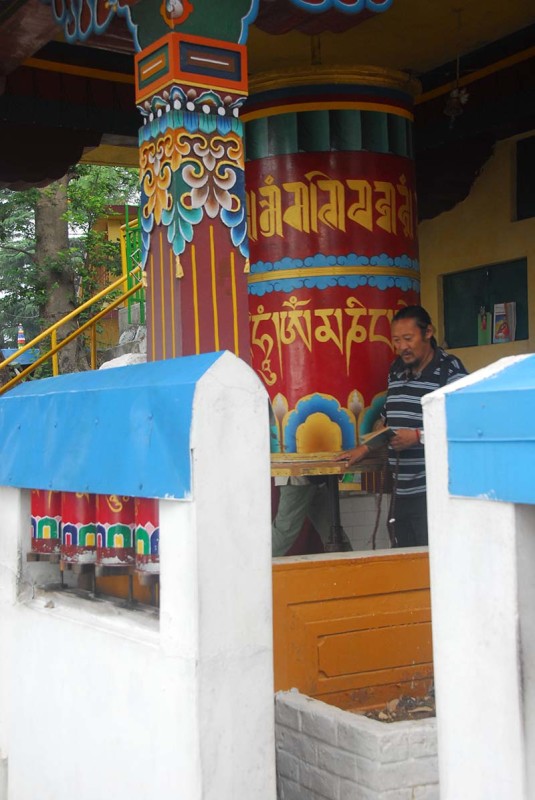 One of the big prayer wheels

Outside the temple gates it’s into the maelstrom of cars, trucks, motorbikes, animals and people that are involved when walking up temple road towards the hotel indeed along most of the roads in town. Cars and bikes will stop in the middle of the road, reverse a bit, do a three point turn, go the wrong way up a one way street and nobody thinks anything of it. The noise of horns sometimes seems continuous, but after a while one gets used to the rhythm of them as the cars push past the people who sway in and out of the way whilst checking out the stalls that line the road on both sides. The stall holders are not aggressive, don’t hassle, wait for you to take your time looking at the rupas, malas, jewellery, precious stones, solar powered prayer wheels, umberallas, shawls, Free Tibet patches, woollen socks and beanies, shirts, water bottle carriers, pants, CD’s, DVD’s, prayer flags, bottles of water, singing bowls, flutes and drums … Time for breakfast. The Four Seasons … one of our favourite eating spots The indian visitors are by far the most numerous and arrive packed into large RUV’s with piles of luggage strapped to the roof. Go up to the main square in the evening and amid the traffic chaos and the sounding of horns, they stand in large groups around the fast food stalls eating sticky cakes and licking ice cream. It must seem very cool up here after the heat of the plains down there in Pathankot and Amritsar. It was 47 degrees in Amritsar recently. Here it seems to be in the mid to high twenties. The mountains are sometimes there and sometimes not … the view of the Kangra valley from our balcony is sometimes there and sometimes not depending of the humidity and amount of dust in the air. Sometimes storms roll down from the mountains amid lightening and peals of thunder followed by rain. They say that this area is one of the wettest in India and the man in our favourite restaurant told us that in July it rains all night and all day non stop. We’ll be gone by then! The view from our balcony which we can sometimes see

Walk up the hill from the main square and you enter a different world. One of the roads takes you quickly into the pine forest and the sound of horns disappears to be replaced by bird song and sweet smells. Further up the road becomes a trail which leads us to Daramkot where many of the western travellers end up. Here you can learn about many things spiritual from yoga and tai chi to meditation and buddha darma. Spend a week in the Vipassana  centre or learn to cook punjabi food. Many young Israeli’s end up here following their spell in the army at home. And then every other nationality you can think of. Go further and you can climb above it all to Triund and come face to face with the mountains … even go further and climb to the snow line. The view of the mountains from Triund Through the pine forests

Macloud Ganj sits in a saddle and the town cascades down the hillsides from there. The land is very steep and the buildings are of the standard asian concrete variety, luckily softened by the colours they are painted; blues, yellows, pinks, greens; all with the ever present black polythene water tanks on their roofs, and connected by the tangle of wires that carry the mostly present electricity.

Building is accomplished with the minimum of machinery. After the initial hole is dug, and apart from the chugging concrete mixer, the rest is done by hand. Mules carry their loads of gravel, bricks or rocks to the site where they are moved around on the heads of women with bright saris, then manhandled into place by the men. Many a building remains half built while a new one starts next door. Most buildings have bundles of steel reinforcing bar sticking out of their flat roofs in case they want to build on another storey later. If there is a tree in the way, they often just build round it leaving it growing up through the roof. And then there is our room at the Annex hotel. Room 504 on the top floor. Generously sized with everything you might need, it is above all comfortable. True the flush for the toilet is somewhat strange and there are taps we are under instructions not to touch; the ceiling fits somewhat loosely together; the blue doors are bright against the white walls and the built in cupboards have plenty of room. And the view over the Kangra valley from the balcony is really expansive as we sit high above Temple road. So there we are … it is raining now and the view of the valley had disappeared once more. I have to go down to Dharamsala today to get my tooth fitted, but that is the subject of another story altogether. Tomorrow we get in our taxi and travel to Manali … no overnight buses for us! In the cool of the evening – main square